Food fusion! Taking two completely different foods and mashing them together to create a new food! There are tons of fusion ideas out there. And chances are, you’d be easily able to invent and create your own food fusion ideas. But we’re here to show you some of the more popular ones being created and sold around the globe, and provide you a link to the recipe so you can try it yourself!

Some of these may sound just a little too bizarre, but what’s the harm in trying, right?

Eating cold pizza for breakfast is a time honoured tradition. But what if your pizza is made specifically for breakfast. This particular pizza could be eaten for any meal, really, but for any egg-lovers out there, this makes an interesting substitute to an omelette or eggs on toast.

This recipe is like an omelette atop a pizza crust. And it sounds amazing! Definitely one I’m going to be trying in the very near future!

Get the recipe here!

That’s right. Two of my favourite foods of all time fuzed into one amazing dish. Spaghetti Tacos. To be fair, this really just sounds like spaghetti in a tortilla shell, which means you’re not really getting much of the taco taste. Or is it the other way around? Do you simply add pasta to your tacos, leaving not much of a spaghetti flavour?

Really, you can do it both ways. The best recipe I’ve found adds a taco seasoning with a basic pasta sauce, so you’re not mixing too many flavours. Plus, let’s be honest, it’s just waaaay more fun to eat spaghetti out of a tortilla. And though the recipe below suggests hard-taco shells, I’m a fan of soft shells myself, and would definitely swap them out. But you do you.

Check out the recipe!

I love Greek food. Everything just feels so fresh to me. So why not take the ole’ greasy quesadilla and fill it instead with Greek ingredients? (Disclaimer: I love quesadillas too. And I have nothing against greasy food, but sometimes you need a switch-up.)

This takes the classic spinach, tomatoes, olives (gross I’d take those out), and cheese along with a homemade tzatziki sauce and bakes it up in a tortilla shell to create a mouthwateringly delicious quesadilla.

I’m going to be completely honest with you. I would skip all of the classic egg roll ingredients (cabbage or saurkraut) and literally just put in pastrami and cheese. Maybe some onions. But if you want the full recipe…

This one sounds a little bizarre and a lot amazing. Carb overload, this recipe takes mac and cheese and adds it to pancake batter to create savoury patties of delight. There are various recipes, ranging from completely from scratch versions to a mixing together of boxed mac and cheese with boxed pancake mix. Some call for you to add maple syrup to the mix, others say to leave it savory. It’s really, 10000% up to you what to do.

We’ll leave you this recipe and trust you to go hunting if it doesn’t suit your needs.

This recipe is our pick!

Okay. If we’re going to name my favourite foods in the world they are: Tacos, spaghetti, chilli, lasagna, and pierogies. So far, three of my top five are on this list. (Two in one dish!) Not too shabby!

A lasagna burrito sounds messy and wonderful. It is a quick make, as you don’t have to layer noodles. The only thing I think this recipe is lacking is the ricotta cheese. However, you can always tweak this recipe to your own liking by adding whichever ingredients you choose. Just remember, rather than layering noodles, you’re wrapping the whole thing up in a tortilla. Mmmm.

Get the recipe here!

Fruit Sushi or Fruishi is a dessert craze in which one prepares fruit to appear like sushi. These cute and colorful snacks make an original dessert plate for any party. I think they’d honestly be a bit too much work for me to just make for myself, I’d rather just nom down on the fruit. But I’m considering making these for one of the regular board game nights I attend with friends. 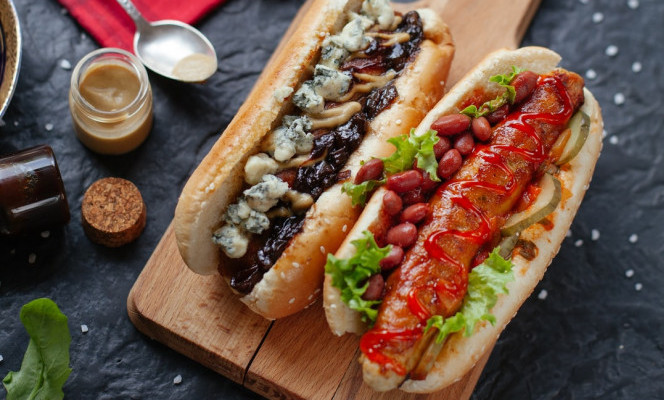 Regular hot dogs are fine, but Terimayo hot dogs are something else! Using teriyaki sauce, mayo, and seaweed atop a hot dog, this is truly an experiment. But not an unfounded one. These dogs are sold out of a street cart called Japadog in Vancouver. And they’re still in business as of 2020, so they must be doing something right!

If you’re looking for a mix between sushi and a hot dog, look no further.

Next to the mac and cheese pancakes, the Ramen Burger is another fusion dish that just screams “College kids got a hold of a kitchen”. I’m not entirely sure how I feel about these ones, though I might be willing to give it a go. Essentially it’s just a regular burger. The only difference is that the buns are two slabs of ramen noodles.

Yeah. You read that right.

The buns are created by mixing the cooked ramen noodles with eggs and frying them into patty shapes. If you try this one, let me know how it goes. I’m imagining that once you bite into it, not only do the burger toppings go everywhere, but your bun dissolves into noodles. Though the video on the website shows them holding together quite well, I’m not sure I trust my cooking abilities to that extent.

Which of these fusion foods are you most eager to try? What’s the craziest fusion food you’ve tried? Let us know in the comments!