Pizza. One of the greatest gifts given to mankind. It’s simple, yet so effective. It makes for perfect party food, breakup food, and hangover food. You can dress it up fancy or keep it simple. It’s delicious straight out of the oven, or even refrigerated the next day. Pizza is, in a word, perfection. So who is it that is responsible for introducing this life-changing delicacy to the world? Who invented pizza? And how can we ever repay them?

The Way Way Back

As with many foods, tracing the exact origins can be difficult because many cultures tend to do similar things with food. So if you want to get picky about it, you could argue that pizza has existed in some form across many cultures for thousands of years. Greeks, Persians, Egyptians, and other cultures have all served flatbreads with toppings. It was an inexpensive food that was easy to eat, often the mark of those in poverty.

But the pizza we know and love today is of course tied to none other than the country of Italy. Are you surprised? Probably not. 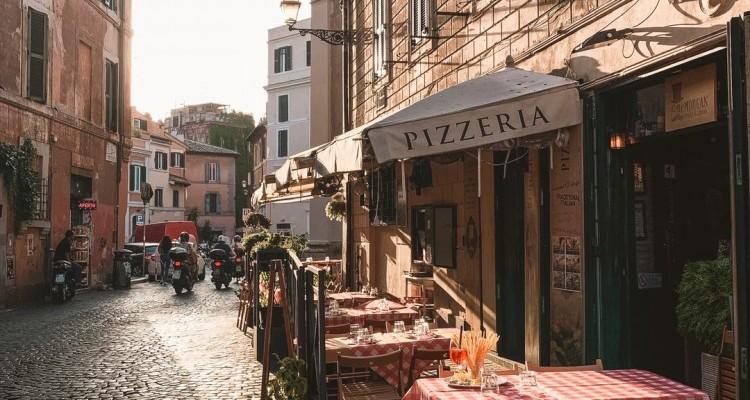 The first pizzeria was a small stand which popped up in 1738 in Naples, Italy. It eventually morphed into a restaurant known as Antica Pizzeria Port’Alba about a hundred years later. It is credited as being the world’s first pizzeria. Customers were able to pay for their pizza up to eight days after consuming it. Imagine that kind of honour system today! It’s said that patrons even created poetry to honour the pizzas! Honestly, I could write a few love poems to pizza myself.

The coolest thing about Antica Pizzeria Port’Alba is that it is still around today! You can actually visit what is believed to be the world’s first ever pizzeria. Though I’m sure it’s undergone some renovations since its opening a few hundred years ago.

The Pizza We Know and Love Today

It wasn’t long after the opening of Antica Pizzeria Port’Alba that the more modern pizza came to being. In 1889, the King and Queen of Italy came to Naples. It is said that they were tired of all the upper class French food they’d been served on their tours (same) and specifically requested an assortment of pizzas from a pizzeria called Pizzeria Brandi (also still standing today). The man most credited with being the person who invented pizza was Raffaele Esposito.

Raffaele created a number of pizzas for the King and Queen. But the one that was supposedly Queen Margherita’s favourite, was one with tomato sauce, mozzarella cheese, and basil, representing the colours of the Italian flag.

Since that day, this style of pizza has been known throughout Italy as Pizza Margherita.

So who invented pizza? It’s difficult to say, but most people, if forced to provide a name, would say Raffaele Esposito.

The Rest is History

Pizza made its way to the rest of the world through immigrants, gaining extreme popularity in the United States of America. It’s believed that it actually became popular in the USA before it was considered widely popular in Italy. There’s something about cheap and easy food that we North Americans just can’t get enough of. (Kraft Dinner anyone??? Kraft Dinner PIZZA anyone???)

In the end, I think it matters less who invented pizza and more that pizza was invented at all. Though, I wonder how Rafaelle Esposito would feel if he could see just how insanely his invention exploded throughout the world. I’d like to think he’d shed a tiny tear.

If you want to view the story of Raffaele in adorable cartoon format, check out the video below!

Did any part of this story surprise you? Is this old news to you? Let us know! What else would you like to find out the origins of? Drop a comment!

Don’t forget to check out the history of the hamburger!